Hello All,
Limber up your ears and your lips: we’re going to do some French Oral Gymnastics!
Today, you’ll practice saying the French words for, “did you expect that to happen?” (Update: here is another example of the same expression.)

Please repeat after the speakers 8 times.

Ok! Now that you know all of that stuff intellectually, now that you hear those sounds, practice echoing them correctly after the native speakers so that all of that becomes automatic and you don’t have to think about it next time.

For members: the slow echoing recordings can be downloaded so that you can practice echoing them in the car. (Not dangerous because it does not require reading while driving!)

If you don’t know what I mean by ‘echoing,’ here you are: I mean repeating just after the speaker. Instead of saying the words at the same time, you allow a slight delay. You may need to turn the sound up a bit in order to hear the speaker’s voice above your own. Look out for words that are hard to pronounce. When you find one, experiment with moving your tongue and lips in new ways until you find a movement that makes that word easier to pronounce. I find this to be challenging but fun. I hope you enjoy it! 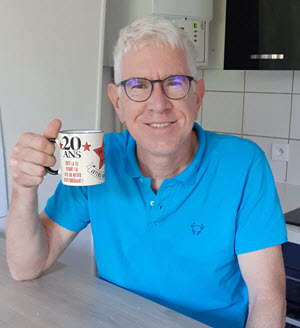 Almost 20 years bringing you these recordings!
Thanks for all of your nice emails over the years.