In this interview, Madame Renée Lefranc recounts how the papacy moved from Rome to Avignon in the 13th century. An interesting story recounted with plenty of humor. 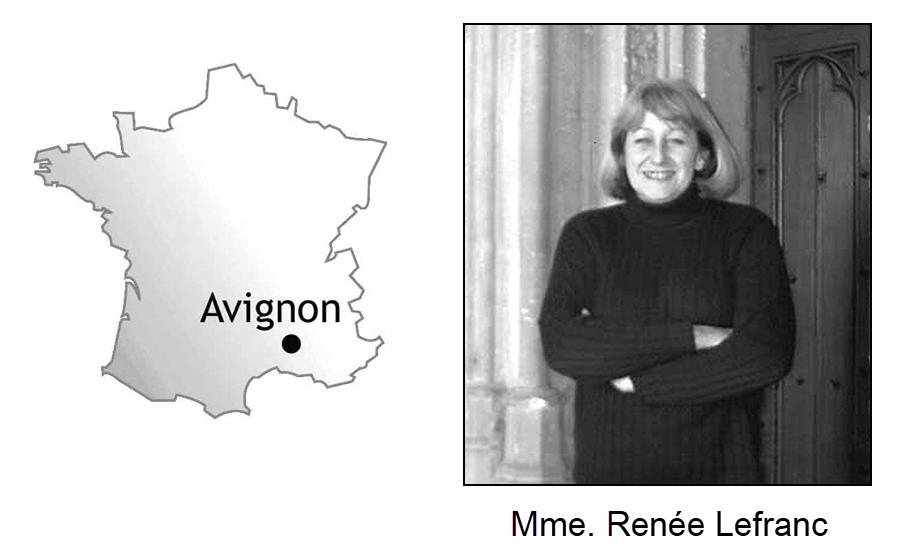 Track 2
The problem goes back to the 13th century when two factions, the Guelphs and the Gibelins, were fighting for two different types of government. The Guelphs wanted the Pope to rule the country from Rome. The Gibelins wanted the Emperor to rule.

Track 4
The tension mounts as Philip the Fair’s armies invade Latium and Philip’s counselor Guillaume de Nogaret slaps the Pope. A couple of years later the Archbishop of Bordeaux (who was on good terms with Philip the Fair) is elected pope. He takes the name Clément V.

Track 5
Because the situation in Italy is chaotic, Clément V decides to stay in Bordeaux instead of moving to Italy. Soon Philip the Fair decides to break the organization of the Knights Templar (he was distrustful of their power and wanted to escape paying the debts he owed to their order.) He has them all arrested. Clément V takes the responsibility for their judgment and moves to Avignon to prepare the trial.

Track 6
Clément V gets out of the trap of judging the Knights Templar by dissolving their order. The head of the Knights is burned at the stake after uttering a curse on all who had persecuted him. Clément V and Philip the Fair die soon afterwards, presumably because of the curse.

Track 7
We back up in time a little bit to explain that, during Clément’s papacy, he had moved around a good bit in Provence. His successors will do the same. The idea of some scholars is, “Where the Pope is, Rome is.”

Track 8
So the Italians had been very angry at Clément V for not coming to Rome. And Clément V, to consolidate his position, had named as many French bishops as possible. So, when Clément V died, another French bishop was elected Pope. This new pope, Jean XXII, had been the bishop of Avignon. He moves to Avignon and sets up permanent residence in the city.

Track 9
So what do the kings of Europe think of the popes living in France? Answer: well, the kings were busy with the 100-Years War. And the popes spent a lot of time working for peace. So, things went relatively well, except for the Italians, who were still upset at having lost the papacy.

Track 10
Finally, Pope Gregory XI returns to Rome. This was expected, because the Popes has always considered Rome as being the proper seat of the Catholic Church. But Gregory XI but dies soon after moving the papacy back to Rome. The Italians hold demonstrations during the election of Gregory’s successor and are able to force the election of an Italian replacement, Urbain VI. But Urbain VI is so hated that the French bishops declare his election illegitimate (because Urbain VI had been elected under threat of violence by the Italian mobs,) and elect a French pope. Because Urbain VI will not step down, there are now two popes, an Italian one and a French one, who takes up residency in Avignon. For the next 40 years, there were two, and sometimes, three popes.

Track 11
So, during the 40 years when there was more than one pope, who was the “Real Pope?” In fact, the Catholic Church doesn’t recognize any of the popes from this period as being the real pope.

Track 12
Benoît XIII is elected by the French faction, saying that he will step down if that can restore unity to the Catholic Church. Once elected, he refuses to step down. Little by little all of Europe becomes allied against him. Explanation of his stubbornness and how he eventually had to escape from the papal palace in Avignon through a side door.

Track 13
So, let’s sum things up: how many popes, how many years?

The links above give you the following recordings: